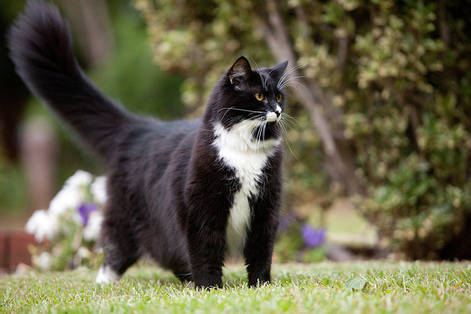 Name: His Excellency Chairman Mow: Lord of all the Things.
Nicknames: Chairman Mow (preferred), Mow (only to the inner circle), Mowsie (call me this and I will hurt you)
Breed: a very dignified Domestic Long Hair
Gender: Desexed male. A very masculine desexed male.
DOB: 13th March 2007
Colour: The most noble colours, Black & White. Glowing golden eyes.
Height: God-like height and stature
Owned By: No one. No man can own one so great.

Chairman Mow (pronounced like Chairman Mao) came into our lives in 2007. A very tiny and sick 12 week old kitten, he was never meant to stay for longer than a few weeks. At the time he arrived, no cat rescue organisation had the ability to take on a potentially contagious kitten. I'm not sure when the decision was made that he would stay but apparently it was made at some point and years later, he's still ruling over the canine members of the pack with an iron claw.

Our first (and most likely only) cat, Mow is a constant exercise in patience and humility. He is very set in his ways and there is very little that can be done to change his mind when he has it set on something. He loves routine and is usually very vocal when something is not to his liking. He's also an uncanny time keeper, able to tell the moment it hits 6pm, and tell when the clocks change for daylight savings - funnily enough, 6pm is his dinner time! In short, he's a cat.

Mow earned the nickname "The Chairman" because of his tendency to voice his opinions in a very loud and demanding way - his mournful meow can be heard anywhere on the property if he needs his subjects' immediate attention. He is amazing at devising cruel and unusual punishments when things are not done on his terms. There have been many items broken due to being pushed off tables and benches and more than a few important items stolen, hidden away behind couches and under beds because Mow felt they were getting too much attention.

Though he can be difficult to live with, he is a cuddly sweet boy, though this only happens when no one is watching and again, only on his terms. Strangers and visitors into his kingdom are met with the cold glare of unbridled hatred that only Mow can deliver.